QR Codes… (Quick Response Code).  They’re the little squares with dots.  (See below.)  A consumer scans the code with their smart phone and, well, in most cases, becomes very disappointed in the results!  Most of the time we’re only being sent to a website – and most of the time, the websites aren’t even mobile friendly.  One gets the desktop version of the website that is difficult to read and navigate on an iPhone or android smart phone.  Fail! 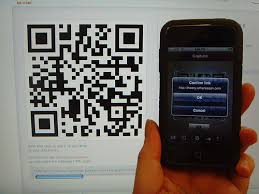 I’ve become obsessed with QR Codes mainly from the ‘let’s-see-how-this-one-is-done-poorly’ sense.  I’ve heard how they’re supposed to be used and successful ways they are being used (shared later.)  But first, let’s review the top five worst ways QR Codes have been used.

I’m not quite sure which one is my favorite so they’re in reverse alphabetical order.

Website Bring up the offending website and there it was – right in the middle of the home page.  Naturally I’m curious so I get my phone and try to scan it.  You can’t scan a QR Code off a computer monitor!  Did no one think of trying this before they went live with the site?

I was really curious where the code would lead me so I printed the screen shot, scanned the code and you know what it allowed me to do?  See a picture!  Um, just put the picture on the website and save us a lot of time and frustration and you a lot of humiliation!

Television Commercial Yep, there it was in the corner of the advertisement.  I guess they’re placing it in the ad based on research that more and more are watching TV with laptops, pads or smartphones in hand but for those of us that don’t have it in hand, can one grab their phone, access the scan app, and get up to the TV in time to scan the code?  And based upon the fact you can’t scan a code off a computer monitor, can you scan one off a TV monitor?

Restaurant Menu The code was on the back of the menu.  I scanned it.  It took me to the restaurant’s website – that WAS MOBILE FRIENDLY!  It was a desktop version.  As I flipped through the site, it shared the location of the restaurant and their menu because when I’m sitting in the booth in the restaurant reading the menu, I need to know where the restaurant is and the large menu is too difficult to read so I want to squint at my smartphone to see what kind of burger I want!

Billboard Who in the flip is going to slam on their breaks on the Interstate to stop on the side of the road to scan the code off a billboard?  Genius the one that thought of that use!

Airline Magazine Um, VP of Marketing Genius… we’re on a plane.  and our phones are supposed to be off… and there’s no internet… and one needs a phone that is turned on and internet to follow the code… and, ah forget it!

So after all that sarcasm and ridicule, how are QR Codes best used?

“Getting the consumer one step closer to purchasing” was the best way I’ve ever heard it.  Got them interested in your destination?  “Scan here to book your hotel room” or “see our weekend trip packages” or “purchase your tickets to the (museum, theatre, park, etc.)”

I’ve seen QR Codes in ads to travel writers.  The code took the writer to a page on the website that had dozens of story ideas.

Colleagues have QR Codes on their business cards linking new contacts to their Vcard saving time of typing in the contact information!

Put them on conference badges so when one scans it, they have the attendees’ contact info.

Sign at an expo booth.  “Scan to register to win!”

Receipt… have them directed to your TripAdvisor or Yelp or UrbanSpoon listing so they can give a good review or so they can join your email list.

There’s seven.  Bet with your and other reader’s comments, we can come up with seven more!  Comment and share your example of how to use a QR Code.  You can share your QR blunders too!  I always enjoy a good laugh!